Back to the main site
Home
Grow
The Biggest Technological Innovation Since the Internet or a Bubble About to Burst: Bitcoin, Cryptocurrencies, and Blockchain
Investor Education Investments & Economy Grow

The Biggest Technological Innovation Since the Internet or a Bubble About to Burst: Bitcoin, Cryptocurrencies, and Blockchain 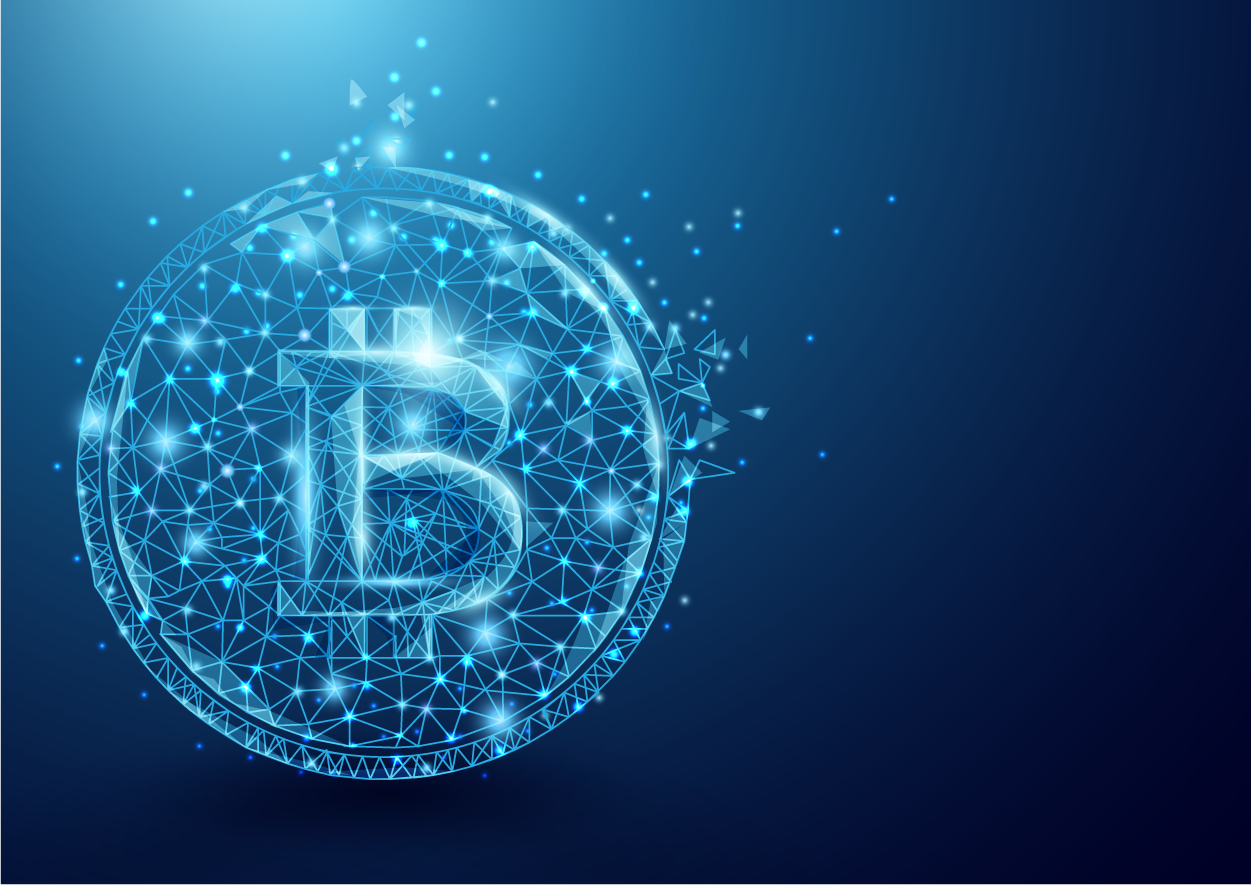 Welcome to our financial education resource, covering key topics in financial services, including terminology, trends, and strategies shaping the investment and banking industries. We have developed this resource to empower you to make informed decisions about your finances and be better prepared when working with your advisor and/or banker.

It seems daunting to even attempt to author an article that explains Bitcoin. And, predicting the future of Bitcoin is nearly impossible (apart from guessing). The dividing lines have been drawn as to whether it is the currency of the future or a bubble waiting to burst.  Financial newsmakers have come out on both sides, from major investors such as Tim Draper and the Winklevoss brothers, to those who don’t believe it will ultimately survive as a viable option, such as Howard Marks and Ben Bernanke. While there is much excitement surrounding Bitcoin, and the purported millions (or more) people have made trading it—is Bitcoin the real story? The underlying technology that provides for Bitcoin transmission, called blockchain, may be the bigger narrative. Let’s first start with what Bitcoin is, its advantages and disadvantages, and then introduce blockchain.

Bitcoin is a form of digital currency, created and held electronically. There are no actual bills or “coins” that you can physically touch, hold, or exchange to buy items with. There is a bit of mystery surrounding the actual creator, but Bitcoin was invented in 2009 by a person (or group) who called himself Satoshi Nakamoto. His stated goal was to create "a new electronic cash system" that was "completely decentralized with no server or central authority." After cultivating the concept and technology, in 2011, Nakamoto turned over the source code and domains to others in the Bitcoin community, and subsequently vanished.1

Bitcoins aren’t printed by governments, like dollars or euros – they’re produced by people, and increasingly businesses, running computers all around the world, using software that solves mathematical problems.2 Though they are produced (through a process called “mining”), there is only a certain amount that will ever be “mined”.

One reason the price has gone from $997.69 on January 1, 2017 and closed at $13,860.14 on December 31, 2017, according to some, is that there is a limited supply available. As of February 10, 2018, 16,859,188 have been mined3, with the original Bitcoin protocol set forth by Nakamoto dictating that only 21 million bitcoins will ever be produced. Bitcoin could be compared, at least on this point, to gold. Like gold, the claim is that Bitcoin cannot simply be created arbitrarily. Gold must be mined out of the ground, and Bitcoin must be mined via digital means. Linked with this process is the stipulation set forth by the founders of Bitcoin that, like gold, it have a limited and finite supply. Once the total number (or amount) have been unlocked and released into supply, there are to be no more. (Unless the protocol is changed to allow for a larger supply.) Supporters of Bitcoin say that, like gold, the fixed supply of the currency means that it can’t be debased by central banks as is the case with fiat currencies. 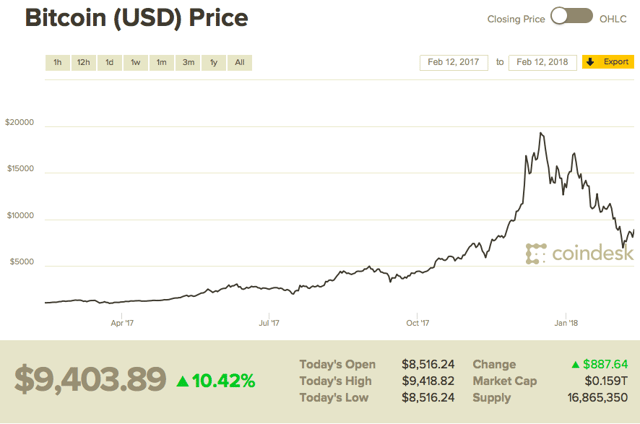 Many believe that additional regulations are coming. One of the first to step in thus far has been the IRS. The IRS released a publication dealing with cryptocurrencies, concluding that they are actually “property”. This “property” can be held for investment, or used to pay for goods and services. However, the IRS made it clear in the release that Bitcoin or any other cryptocurrencies are not legal tender.5 The Securities and Exchange Commission (“SEC”) has also issued a statement, that while questions exist as to whether cryptocurrencies are securities, and thus fall under SEC, that investors should be cautious and fully understand risks, liquidity, and laws surrounding every aspect of cryptocurrencies.6

As many pundits have noted, there are some potential benefits to this form of digital currency. Here are a few of the possible advantages:

Is Bitcoin the Only Cryptocurrency?

But Is Blockchain the Real Story?

It is impossible to know if Bitcoin will survive, or one of the many other cryptocurrencies. But there may be a larger story looming underneath the headlines of a particular cryptocurrency. That story is blockchain. Blockchain is a shared, immutable ledger for recording the history of transactions. It also, and just as importantly, contains a private address for all of your personal data and information that you control. Put this in context in the current information age, where Facebook “owns” (or at least knows) the information behind your identity, birthdate, friends, and social network. Your information is then sold to advertisers, and you are subject to any “fake news” story you choose to read. Or think of Equifax, which knows your entire credit history, or their version of it, but can be hacked in one location with information about all users. The control is not in your hands, whereas if you controlled your information, the result may change.10 According to IBM, blockchain “fosters a new generation of transactional applications that establish trust, accountability, and transparency – from contracts to deeds to payments”.11

The following is a diagram of the challenges of the current system where each person or business has their own ledger:

However, using blockchain, a transaction can become simpler in execution, safety, and efficiency. 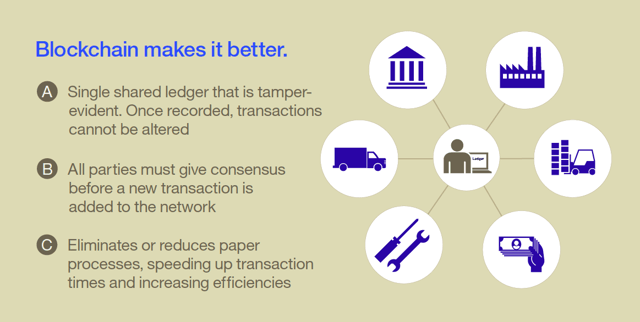 Financial and Other Applications

There may well be greater applications to blockchain technology, its use is already gaining some traction. Blockchain provides seamless, simultaneous integration of transactions, settlements, and ledger updates directly between multiple parties. It creates a secure way to share information and conduct transactions without the need for a single, central party to approve them. As that can increase the efficiency of transactions, it can also create uncertainty and a lack of confidence. Only authorized network members have the ability to see details of their own transactions, providing confidentiality and privacy. All updates to the shared ledger are validated and recorded on all participants’ shared ledgers, which purports to drive security and accuracy. Because all updates to the ledger are unchangeable and auditable, network members can accurately trace their past activity.13

So…Should One Invest in Bitcoin?

We really do not know if Bitcoin, Ethereum, Ripple, or any number of other cryptocurrencies will become widely accepted (and legal) tender. Volatility remains at record levels, and many still believe cryptocurrencies to be a looming bubble. But with a soaring run-up in price, were investors actually rewarded in 2017? It might sound easy to say yes, but risk-adjusted returns might suggest otherwise. One calculation puts the returns on a risk-adjusted basis at 3.1% last year, well below that of stocks.14 Certainly, at this point it is difficult to determine value for the online tokens. Investments that are difficult to determine an accurate price for typically are too speculative in nature for sound investing. Speculation may have its place with certain investors and with certain portfolios, but only where the possibility of total loss is acceptable. At First Foundation, we believe in understanding where we invest our client assets, providing transparency, and the importance of liquidity. We do not believe Bitcoin has yet attained adequate price stability at this point. Therefore, we cannot determine fair value, or if the property would make for a good value investment. We do see wider adoption of blockchain technology, and will continue to watch further developments. We will publish our thoughts as the situation evolves for both Bitcoin and blockchain.

Feel free to reach out to your First Foundation Advisor if you have any questions about how to best plan for upcoming market and economic events.

About the Author
John Hakopian, President
Mr. Hakopian oversees the vision, strategy, operations and development of investment management services for the firm. His entrepreneurial spirit combined with his focus on results, exceptional interpersonal skills, and ability to emphasize people’s core needs continue to drive First Foundation’s management success as the regions’ leading independent wealth advisory firm. Having been with First Foundation since its inception in 1990, Mr. Hakopian has been closely involved in developing and delivering the firm’s investment services. He became President in 2009. Mr. Hakopian earned a Bachelor of Arts degree cum laude in economics in three years from the University of California, Irvine and an MBA in Finance from the University of Southern California. Read more