The Week Ahead – E for Earnings

If you recall our piece before the end of the quarter, Another Report Card & the Wall of Worries, the S&P 500 index continued to weather “bad news” throughout the year, and in particular during the third quarter. What’s interesting is that just a few weeks later (as of last Friday, October 15), the S&P 500 is higher (4,471 vs. 4,455) while also being “cheaper,” with a P/E ratio of 20.9x vs. 21.1. What gives? Earnings is what! Analysts and investors as a whole have greatly underestimated the pace of recovery for publicly traded companies as a whole so far in 2021. Remember, at the start of the year the surprise to the upside was the fact that the re-opening of the economy came much earlier than originally anticipated. So far earnings growth has justified the increase of the S&P 500 and, probably most shocking to many investors, it’s cheaper than it was to start the year as multiples have actually contracted. 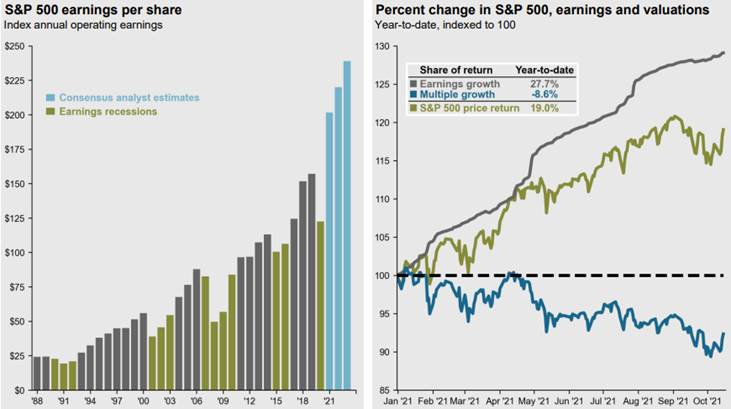 Last week was the first week of earnings season and investors saw 41 S&P 500 index companies (including early reporters) report in. Those 41 companies comprise about 18% of index earnings, and so far financials have been a nice surprise. Overall, 66% of the companies have beaten on both sales and EPS. This week we will get more multi-national companies reporting in, which will be an important lens into the global consumer. Year to date a record $884 billion in buyback programs have been authorized so far. Clearly many companies view that their public equity shares are undervalued to what they think they’re worth. While attention has been rightfully focused on inflation, investors will get a better grasp on how companies are dealing with their unique supply chain issues, labor issues, and what it means to their bottom lines. The ports of Long Beach and Los Angeles, points of entry for 40% of containers entering the U.S., are now moving towards a 24/7 operation. Large companies will also be expanding hours to move more cargo off docks faster.

In the week ahead, investors will continue to monitor the employment landscape (initial jobless claims), housing (new starts and existing home sales), and the underlying economy with the preliminary release of manufacturing and services PMIs. Last week we saw a pandemic-low of 290,000 for initial jobless claims, which is a noticeable decrease from 364,000 that occurred just two weeks ago.