The Week Ahead – Fifty Years

Can you believe January has already come and gone? This past week seemed to move in slow motion day-to-day, as new headlines flew across the ticker tape. We processed the tragic passing of Kobe Bryant, his daughter Gigi, and seven others. The Fed had their first meeting of the year and markets took their language and posturing as dovish, sending the 30-year U.S. treasury back below 2% and the 10-year U.S. treasury down to last September’s lows. U.S. GDP for the fourth quarter of 2019 came in 2.1% and at 2.3% for the full year of 2019 (slowing due to trade wars but not contracting). Brexit finally happened after 3.5 years, though not much will change for them over the next eleven months. Coronavirus fears continue to rise on a global scale.

Meanwhile, domestically, the Kansas City Chiefs rallied in a thriller and won their first Super Bowl in fifty years. During the Super Bowl, there were some interesting stats on how much has changed over the last 50-years. A 30-second commercial was $78,000 compared to $5.5–$5.6 million today, while the average ticket price in 1970 was $15 versus today’s average price of $2,500. A quick look at 1970 shows a world dealing with multiple walls of worry much akin to today’s environment. Taking a look back at various global epidemics over the last 50 years (and the acknowledgement that each was unique and economic business cycles differed) shows that, on average, investors are able to shrug off fears within six months.

The week ahead will be loaded with multiple data points for investors; starting with both manufacturing and services updates, and ending the week with the employment report. 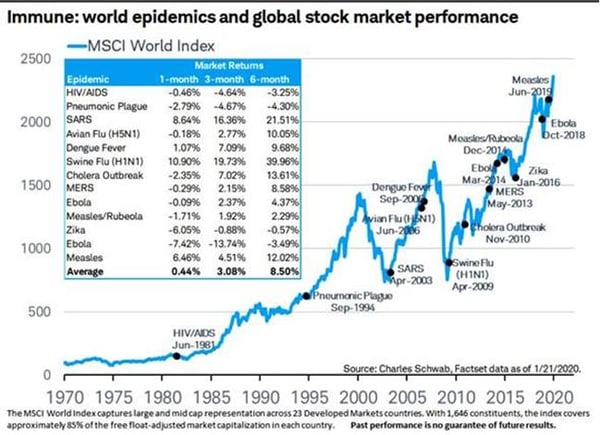