The Week Ahead – Scorching Summer Segues to September Swoon

In our last Market Action Update we noted how “quiet” the S&P 500 had been during July and August, with zero days seeing daily price moves of +/- 2%. Over the last 18 trading days we’ve seen that 2% threshold breached four times, or about 22% of the time, which has heightened investor angst. One possible reason for the increased volatility could be new entrants into the investing arena. A recent Bank of America Merrill Lynch report estimates that retail investors have been accounting for 15-20% of equity trading volume since March, a significant increase from the historical estimate of 10%. While the S&P 500 ended the week -0.61%, the day-to-day change was volatile (daily price returns from 9/21 – 9/25): -1.16%, +1.05%, -2.37%, +0.30%, and +1.60%.

While domestic equity markets have whipsawed for the month, the normal canary in the coal mine for investors has always been the fixed income markets. The U.S. Treasury provides daily yield curve interest rates and the data has been pretty mundane. The 10-year U.S. treasury is close to the same level as it was to start the month, 0.66% while the 2-year note has moved from 0.13% to 0.12%. Credit spreads between treasuries, investment grade bonds, and high yield bonds have also maintained their current spread levels, one would have expected them to widen out further akin to what we saw in late March and early April as bond markets began pricing in Covid-19. We have seen some global investors seek safety, in particular coming back into the U.S. dollar which has increased over the last four days. The VIX index, which reflects volatility or better known as the “Fear” index, has also stayed relatively stable, moving from 26 to 28 over the course of September. The VIX peaked at a record high of 82.69 in March right after California issued their stay-at-home orders. 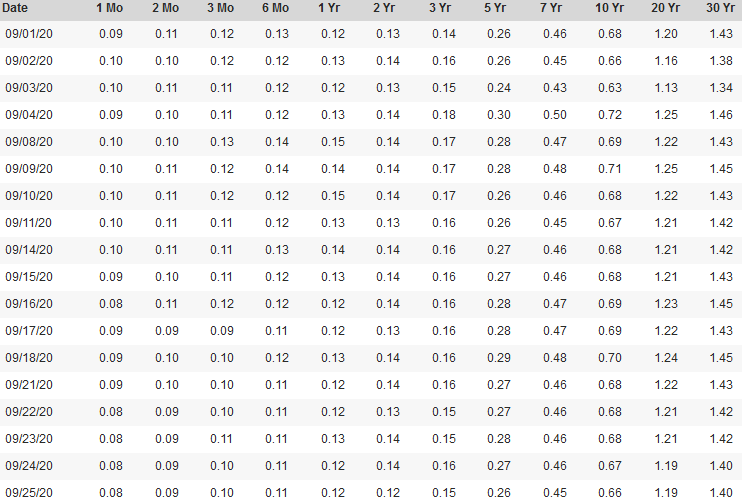 Taking a look at current tailwinds and headwinds, the long-term backdrop has not changed, however the near-term “smoke” (as my colleague Brett calls it) has become front and center – in particular after the FOMC once again reminded fiscal policy makers that more support was needed. Federal Reserve Chairman Jerome Powell specifically noted, “The power of fiscal policy is really unequaled by anything else.” Another round of fiscal stimulus would help prevent the risk of the economy backsliding and provide better transparency for investors that the economy is on a more stable foundation. Long-term drivers of the economy such as housing continue to show strength, and another vaccine has joined the Phase 3 clinical trials group bringing that total to 10. Headwinds have increased, however, in the short-term, as fears that appointing a replacement for the current vacancy on the Supreme Court of the United States will take priority over a second stimulus bill. Initial jobless claims over the last four weeks have also flattened out, which in turn have tempered expectations that the unemployment rate will trend down further from the current level of 8.4%. We’ll get better transparency on Friday when September’s employment report gets released. Consensus expectations show that many expect the unemployment rate to tick down slightly to 8.2%. Lastly, political rhetoric and demagoguery from the Presidential election will increase as debate season begins on Tuesday. We’ll finally see President Trump and former Vice President Biden head-to-head instead of sparring behind twitter and interviews. All said and done, the week ahead will be one with a lot of data points to be checked and measured, and more importantly to reaffirm the direction and velocity of change. Each day will bring more transparency as winds push the smoke away for clearer days ahead.

The Week Ahead – Life in the Vax Lane

The Week Ahead – Other Factors at Play