It is rare that the three largest growth engines in the world, the U.S., China, and Europe, are struggling at the same time. Each is facing related, but also unique, macro-headwinds. In summary, we refer to these headwinds as “ICE” – inflation, Covid, and energy. The U.S. is dealing with historically high inflation. In China, the headwinds are largely self-inflicted, as they maintain their current Zero-Covid Policy causing them to struggle to effectively addressing the endemic. In Europe, they are facing a serious energy problem due to their over-reliance on Russian energy. Weaning itself of its dependence quickly has been painful. So far, smoke has been emitted from each of these growth engines, but no fire (recession) has been sighted.

Domestically, all eyes have been on the Fed who has made it clear they have taken the gloves off to aggressively fight inflation. Their actions and their comments have indicated that they are willing to increase the chance of a domestic recession in order to better contain inflation – and faster. The initial line in the sand for investors was determining when peak inflation occurred. Due to the Russia-Ukraine war, the original timeline for peak inflation was pushed from the first quarter of 2022 to the second quarter. With yesterday’s CPI release, as well as this morning’s PPI release, it appears peak inflation has occurred. However, the reaction by the market after yesterday’s inflation reading indicated that they are now focused on the pace of the decline of inflation. Investors had been hoping for a faster decline in many of the components of CPI, but the latest reading showed continued upward pressure on components such as shelter, new and used vehicles, and apparel – even as gasoline prices declined. The next derivative of continued elevated inflation is that the Fed has the green-light to continue to raise interest rates, and the market has all but confirmed that a 75bps rate hike will occur at next week’s FOMC meeting. 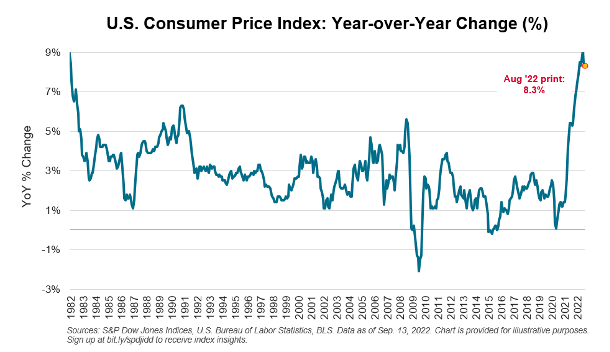 Staying focused on the long-term, but what to expect in the near-term

Over the next six months investors should expect continued, elevated volatility as the Fed and other Central Banks continue to be the largest drivers of investor sentiment. Potential green shoots for equity market rallies will likely occur during periods where fundamentals take the torch from global macro fears, such as earnings season. The summer rally that we recently experienced was just that: a period where company earnings were the focus of investors’ attention. Domestically, the fed funds rate will likely end the year between 4.00% and 4.25% as inflation remains in the cross hairs for the Fed. China has a massive political event in November as President Xi Jinping tries to solidify power. China’s economic pain has been self-induced, and they have begun to realize the economic damage that has occurred with the continued shutdown of major cities, factories, and ports. They have attempted to stimulate their local economies by cutting rates, as well as adding more stimulus. However, one lever they could pull to resuscitate the economy would be to move away from their Zero-Covid Policy and shutdowns, much like the rest of the world. In Europe, eyes will be on Russia and Ukraine, as a best-case scenario will be some form of a peace accord allowing the pipelines to flow once again. Weather will also remain a key focus if there is no resolution, as a mild winter would keep energy prices moderate.

Over the next 12 to 18 months investors will have more clarity around the terminal fed funds rate and more transparency around whether a soft landing has been achieved. Investors have been pricing in elevated recession risk throughout 2022, but in the event that a recession does occur, it will likely be mild and not to the magnitude of the Great Recession or the Covid-19 Pandemic. Fixed income markets have priced in rate cuts from the Fed in late 2023 as inflation is expected to have eased by then. Investors have historically been rewarded when holding investments through volatile times. The average of the 15 worst days for the S&P was almost 9% from 1950 to-date; however, the average return one year later averaged almost a 31% return. 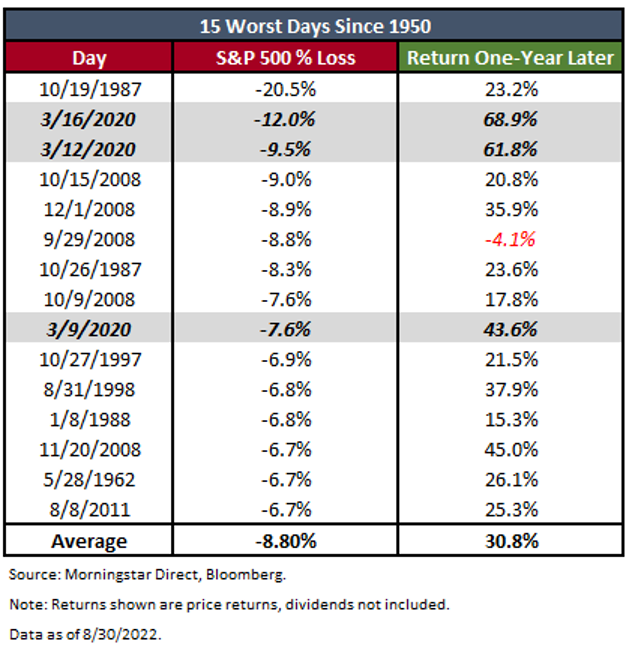 As we have noted over the years, having a longer time horizon rewards investors. As we near the end of the third quarter, many of the bullet points we highlighted here, “Bear Market: Painful Present Creates Future Opportunity,” remain relevant.

As Nobel Prize winning economist Paul Samuelson once noted, “investing should be more like watching paint dry.” Today, however, it is more like waiting for the “ICE” to thaw.

The Week Ahead – A Clear Message from the Fed

The Week Ahead – We’re Having a Heat Wave