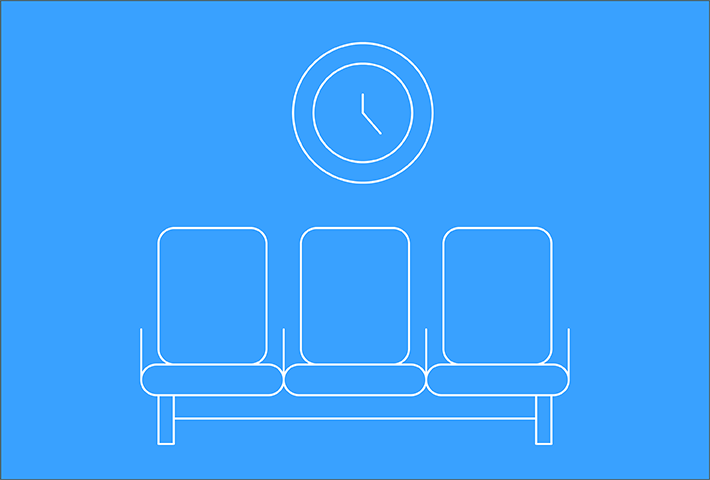 As we noted in our latest quarterly update, “Volatility is Back with Vengeance,” the start of 2022 has been turbulent. Since we released that commentary, we have seen global markets continue their gyrations with ebbs and flows, both to the positive and negative, as investors continue to await data points for the search for “normal.”

Since the second quarter started, investors have gone through 24 trading days for the S&P 500. Out of those 24 trading days, investors experienced six days where it moved +/-2% from market open to close, or better said, 25% of the time. The last time investors saw persistent volatility such as this was back in April 2020, when 48% of the trading days saw moves of >2%, and again in March 2020 which saw 82% of trading days move up and down like a roller coaster. 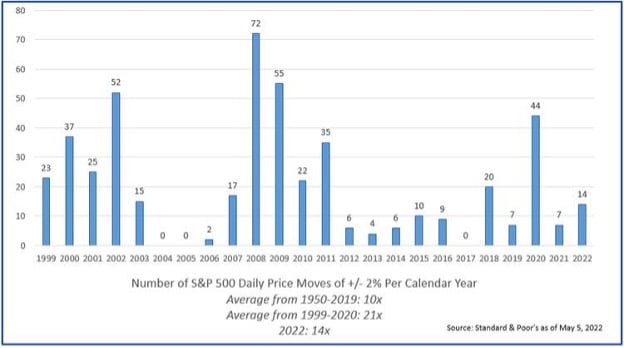 It’s clear this time around we aren’t facing an unknown global pandemic and a self-imposed economic shutdown. So what’s changed over the past few weeks?

The most important was the Fed delivering what they promised this week, with a 50bps Fed Funds Rate increase and the announcement for the reduction of their balance sheet to begin in June. Since March, the Fed has communicated ad nauseam that they were focused on reigning in inflation, which has remained persistently high. Everybody from Main Street to Wall Street is trying to figure out when inflation has peaked. However, we won’t know when the peak has occurred until after the fact. One thing to note is that while the Fed has singled out inflation as their main focus, Fed Chair Powell’s comments that the Fed has taken a potential 75bps rate hike off the table and indicating two 50bps moves was seen possibly as an indicator that inflation may peak sooner than later. Sticking with the Fed, they’re continuing to do their best to navigate a soft landing and to avoid a recession in the near-term. Balance sheet reduction, also known as Quantitative Tightening, will begin in June and is paced to occur very slowly.

China’s reaffirmation to their zero tolerance Covid policy has also continued to befuddle investors searching for normal as what was supposed to be a two-week shutdown for the 25 million residents of Shanghai starting March 28 has continued to be extended. Currently there are full or partial shutdowns in Shanghai, Beijing, and 42 other Chinese cities, which has continued to put pressure on the global supply chain. Supply chain issues are never a good thing for a market that relies on predictability and accurate forecasts. When big tech is having challenges in these two areas, the entire financial market feels it.

Russia and Ukraine have continued to battle back and forth in Ukraine’s eastern and southern regions. More and more European countries have initiated programs to become less reliant on Russian oil and natural gas. Weaning off Russia will take time. Negotiations between Russia and Ukraine are on-going but only time will tell when and how this conflict will end. This uncertainty is troubling for the financial markets.

The advance estimate for U.S. GDP for the first quarter came in at -1.4%, which was well below expectations. Similar to the Fed, our view is that the U.S. economy remains robust, and that negative print was primarily due to higher inflation and net exports, which saw imports soar and exports fall sharply during the quarter. This is a reflection of stronger domestic demand than the rest of the world. Real consumer spending, which grew by 2.5% annualized in 4Q21, and 2.7% annualized in 1Q22, reflect the strength of the consumer. We had anticipated that the phenomenal fourth quarter results would pull forward future growth, and that was the case. Smoothing out and averaging the fourth quarter of last year and the first quarter of this year, U.S. GDP averaged +2.7%. The employment picture continues to remain healthy and both personal and corporate balance sheets remain strong.

Investors want transparency, and as mentioned before dislike uncertainty. As the world recalibrates a post-Covid reality, a new normal will need to be set. We saw a new way of doing business fully remote in 2020. The work from home pendulum swung fast and hard, and now it is swinging back toward the pre-pandemic world. It’s clear that much in our everyday lives hasforever changed, and that we will need to seek a new balance. The fear now is that a recession may occur much sooner than anticipated as investors monitor closely to see if the Fed can navigate a soft landing. A look at past bear markets show that recessions tend to coincide with them, and recessions are caused by a combination of macro elements such as: commodity spikes, an overly aggressive Fed, and extreme valuations.

While recession odds have increased in the near-term due to increased uncertainty, our base case has not changed since our latest update and we remain vigilant on monitoring all of the data points as we recalibrate for normal: fundamentals, company earnings, economic growth, interest rates, Russia/Ukraine, China, etc.

In closing, I leave you all with a great quote from Howard Marks, co-founder and co-chairman of Oaktree Capital Management.

“Over the last few decades, investors’ time frames have shrunk. They’ve become obsessed with quarterly returns. In fact, technology now enables them to become distracted by returns on a daily basis, and even minute-by-minute. Thus one way to gain an advantage is by ignoring the ‘noise’ created by the manic swings of others and focusing on the things that matter in the long term.”

Register for our upcoming webinar on Wednesday, May 18 at noon PT to hear our thoughts on what to expect in the coming months.

The Week Ahead – Central Bank Week